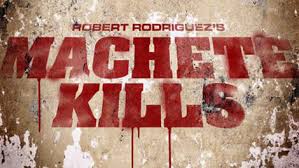 As I mentioned before I am a big fan of Robert Rodriguez. Not just his films, but more importantly his business sense and his bigger vision. Machete was a fun Latino action romp. I have been looking forward to the sequel, finally today the trailer was released. First big surprise, it is all in Spanish, though the film will be in English. Then there is the cast, my faves being Danny Trejo, Demian Bichir and Michelle Rodriguez. The surprises are  Sofia Vergara (with a boob gun apparatus) Amber Heard, Mel Gibson, Carlos Estevez (Charley Sheen embracing his Latino roots) and  Lady Gaga.

To watch go to: http://www.youtube.com/watch?v=V53kqEKiyYU

Deldelp Medina
Deldelp Medina is the founder and CEO of MyPio Corp. a mobile to web SaaS application for Childcare workers and the families they serve. She has spent over 10 years working with the Latino community in the tech, arts, humanities, non-profit, and social justice fields. Asking big questions is a passion; she is now driven to bring that passion to a larger audience.